Amsterdam Airport (IATA: AMS, ICAO: EHAM), also known as Schiphol Airport, is the leading airport of the Netherlands. It was opened on 16 September 1916 initially as a military airbase with only a few runways and platforms for landing. By the end of the World War I the airport lost its military role and was used in civilian needs only with the newly built four maximum 1020 meters length asphalt runways.

Amsterdam Airport Schiphol (IATA: AMS, ICAO: EHAM) is the main airport of the Netherlands located 9 kilometers (5.5 miles) southwest of Amsterdam, Haarlemmermeer municipality, North Holland or just in a 20-minute drive from downtown of the city. It is regarded as the 3rd busiest airport in Europe with 68.5 million passengers passing through the airport in 2017.

AMS is known for its ‘one-terminal’ concept and is divided into 3 sections/ halls with 8 piers which are interconnected, except pier M from which the passenger cannot enter any other hall. Moreover, Schengen and Non-Schengen areas are still separated from each other.

AMS provides 165 boarding gates with 18 double jetway gates for widebody aircraft. With the limit for 500 000 flights annually, it offers international and domestic flights to 301 destinations across Europe, North America, and Asia.

While having the airport facilities and the gateways under a single roof, all of the 3 halls are connected in the Schiphol Plaza, which not only is the central office but also serves as the additional source of the revenue while being a hub for a shopping center and the railway station.

The airport operates under the management of the Royal Schiphol Group. The airport is the hub for national airlines KLM and KLM Cityhoppers, Corendon Dutch Airlines, Transavia, TUI fly Netherlands, Martinair, and for European airlines Jet Airways, Vueling, and EasyJet. 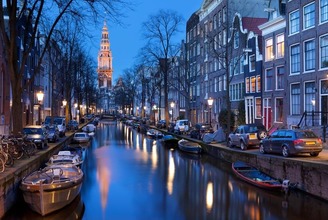